Went to see this last weekend. This is a last-minute blog - there is only a week and a bit left to see this exhibition, so I won't be writing much. Check out http://www.octobergallery.co.uk/exhibitions/2015gys/index.shtml

There are so many rich things about the work on display. One of Gysin's hallmarks is Arabic-style calligraphy, done in hot desert colours, glimpses into a shadow-realm between words and pictures, a realm of magic.

Another of his techniques is used to create the large pictures, painted with a carved paint-roller, forming cityscapes, dream cities. Friends Popping Out of Windows shows tiny photos of his friends, inset into the enormous structures of the world - again, the feel of magic.

Of course, the thing Gysin is most famous for is the invention of the Dreamachine. In the event we went to last Saturday, Luciana Haill spoke of Gysin's intentions in promoting the Dreamachine - to restore an alternation of the dark and light stages of consciousness, our civilization having got stuck in the light side. 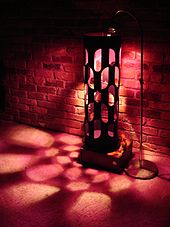 Gysin never fitted in. He got thrown out of the Surrealists for being gay (Andre Breton's exploration of his unconscious mind didn't go as far as addressing homophobia), was in the seminal Lettrist group which influenced Situationism, and then became someone on the outside of the Beat literary scene. He is one of the ultimate Outsider figures in 20th Century art and culture, and his legacy is the power of the one who stands outside, looking at the world through a vision which we are only just catching up with. His work is neither obscure nor comfortable, but supremely elegant and magical, poised and luminous, outside of time. Go and see it while you still can.