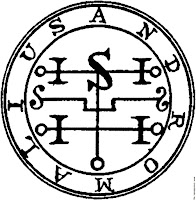 Part of my deal with Andromalius was that I paint five stones with his Seal and give them to magical folk who would be likely to use them. The first of these stones I gave to a friend who runs a café-bookshop. She accepted it happily and said she didn't really have any problems losing things at home, but that things got lost in the shop. So she put it up on a high shelf in the shop, for the benefit of anyone who wanted to try working with the spirit.

I mentioned that anyone who wanted to do that would have to form their own relationship with the entity - just the obvious basics to start with, like asking nicely, and thanking him if you get a result.

The next day, she texted me to say that her assistant in the shop had found her debit card, which had been missing for some time. Great result!

Then the day after that, she texted again to say that her assistant had forgotten to thank the spirit and had lost the card again. IT seems that the card never turned up again; it would be hard to imagine a more pointed message about how to deal with spirits!

The second painted stone I gave to another friend, who has a little experience of working with spirits. He loves a busy life and had no plans to get close to the spirit in the near future.

However, the next time we spoke, he told me that he found something he didn't even realise was missing: a pair of socks appeared under his bed mattress.

I think we can all agree that that was a low-value find. But one way to look at what happened there is to see this as a low-level demonstration by Andromalius of his powers and his readiness to relate to my friend. This is a friendly spirit, along the lines of, 'Here, I can help with that.' But like any human helper, he expects acknowledgement, he wants to be appreciated.

And he expects a bit more than some publicity on Facebook, and some painted stones. He expects me to change.