'Zen and the Art of Motorcycle Maintenance' and the Grecian gnosis

Zen and the Art of Motorcycle Maintenance, by Robert Pirsig; back in the 1970s, this book was a must-read, seen on the housebrick-and-milk-crate shelves of every well-read stoner. I read it, was deeply moved, realised there was something very important about its main thesis, but did not by any means understand all of what he was saying. I bet hardly anyone understood it all. (The copy in the photo was also enjoyed, as you can see by the tooth-marks, by a much-loved and long-departed dog of my girlfriend.) 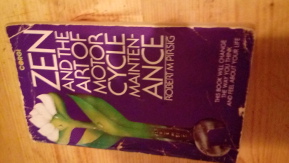 I came back to this book over 40 years later via a chapter-heading quote in Kingsley's 'Reality' (My review of that book here).
'And the bones of the Sophists long ago turned to dust and what they said turned to dust with them and the dust was buried under the rubble of declining Athens through its fall ... buried so deep and with such ceremoniousness and such unction and such evil that only a madman centuries later could discover the clues needed to uncover them, and see with horror what had been done.'

What I now understand of Pirsig's book is down to the fact that I have studied the works of Peter Kingsley and the pre-Socratic Greek gnosis he reveals, the luminous vision of those who are now called philosophers, who were so much more than the dry-as-dust academics that term now evokes.

The madman in the above quote is the author. The book is a story of a road trip, a man and his son, and some old friends. He had what was called a serious psychotic breakdown some years before, and he is on a kind of pilgrimage now, to recall and understand the fragmentary memories he has of the man he used to be, who was burned away by a lot of electro-convulsive therapy. The story is underpinned by Pirsig's tragic relationship with his son, which develops a glimmer of hope when the author finds the courage to be honest with the boy about his mental illness.

That previous man was a teacher of English and Rhetoric who became obsessed with a philosophical problem which arose from considerations of the ugliness and stupidity of much of modern life. The ghost-self he is searching for, whom he calls Phaedrus, Greek for 'wolf', was building a philosophy based on what he called Quality. I shall try to explain what he meant by that.

He starts out by talking about how everyone knows what Quality is, everyone recognizes it, but where it is addressed in, for instance Aristotle, in his writing on rhetoric, it is considered to be the result of a tedious and unimaginative set of style-rules, which Pirsig shows are totally unhelpful to the rhetorician. Rather, Quality should be, according to Pirsig, right at the centre of any scheme of thought based on what life really is like. It does not need defining or limiting - it is the core value of everything we are trying to achieve in life. So he tracks back, via Plato, to the pre-Socratics, to ask where Quality went.

The pre-Socratics and older Greek culture had a core notion of arête - excellence. This is Quality. Everyone recognizes it. Plato then takes this idea of arête and calls it the Good, but in so doing divides it from the True and the Beautiful. At a stroke, arête has been demoted from the core value to merely one of three.

Aristotle then decides that the True is more valuable than the Good or the Beautiful, so arête is completely deposed. And our entire culture is based on the result of this dismal decision. Sure, that decision gave us what would become science, with all the material power that developed, but it gave us an ugly world which is horribly out of balance and in which few of us ever want to be where we are, doing what we are doing.

That quote above illustrates how passionately Pirsig pursued this concept and its philosophical elaboration. Peter Kingsley's works have a similar passion, and in a sense continue Pirsig's thought beyond what he was able to achieve. Kingsley points to an ancient gnosis that travelled from Hyperborea in North-East Eurasia, via Anatolia to Greece, descending through Parmenides, Empedocles, Zeno and the Sophists, whom Plato so roundly condemns.

Zen and the Art of Motorcycle Maintenance is part of a current that is just breaking the surface again after twenty six centuries. It has been concealed because of Plato's politically-driven sleight of hand and his student Aristotle's embrace of dull and ugly systematization. And like it says in the quote above, all of that radiant gnosis has been buried so deep that it is almost as if it never existed. Which is of course what Plato and Aristotle and a lot of people in academic philosophy would rather be the case.

But it is rising again, a true system of initiation which is not borrowed from any other tradition, but lies right at the heart of the West. It is as if a parallel timeline has been spotted, dimly at first, but coming increasingly into focus as these ideas are researched, developed and applied to initiation by Kingsley and those who are following after him, such as Alan Chapman. Pirsig died last year; the work he did is now part of a new view of the origin of our culture, what it means, how it went so horribly wrong and how we might set it on a better track by reawakening the gnosis of our forebears, our birthright of spiritual and worldly wisdom.
Posted by Dave Lee at 11:05 2 comments: Links to this post