February 03, 2019
Years ago, in New York City, my love and I were hanging out with magical friends in Eris's Big Apple, so we thought we'd do an Eris pilgrimage. We went to 23rd Street, to the corner by the Flatiron Building, where the wind gusted and lifted the skirts of the girls, and police would roust the layabouts who were ogling them, giving them the 23 Skidoo. We knew the magic was warming up when we discovered a place on 23rd St neither of us had heard of - the Lawrence and Eris Field Building, one  asset of a private educational foundation. I mean, it's not every day you come across a human called Eris, is it? And on 23rd Street!! We walked around some more. We drank cider and ate apples. It was a fun pilgrimage.

My last little Eris pilgrimage happened by... chance? Chaos? This pilgrimage was also fun, but acquired additional depths. I booked in for a meditation retreat (with https://wiserbydesign.com/) in Greece. It was on the Pelion Peninsula, a gorgeous bit of Macedonia. I looked up which myths were associated with the area and, lo and behold, Pelion, or more precisely, outside Chiron's Cave, was where the golden apple incident was actually said to have happened. I imagine if you are reading this that only the briefest recap of the story will be required.

The occasion is the wedding of sea-nymph Thetis and hero Peleus. The Olympian deities are invited. The wedding is a forced one - Thetis is not a willing trophy-bride of the arrogant hero, more the victim of rape, so there is cause for trouble from the start. Eris is not invited, so of course she turns up anyway, and to sow strife, the meaning of her name, tosses into the party a golden apple inscribed with the phrase te kalliste, to the prettiest.

So we decided to go on a little pilgrimage while we were in the area. I got a nice apple and painted it gold and wrote te kalliste on it, as my offering. Planning was subject to chaotic influences - not only did we have some problems which led to serious delays before we even left England, but when we were there and planning the pilgrimage, we nearly went to the wrong place, due to a mis-transliteration of the local town Milina as Milies, which place is also on Pelion, but miles away.

It was worth the journey, for a number of reasons. For a start, it's easy to see why demigods would pick this area for a wedding - a dramatic Palaeolithic cave on a steep forested hillside which runs down to the sea, headlands plunging down to a semi-enclosed bay dotted with tiny islands. 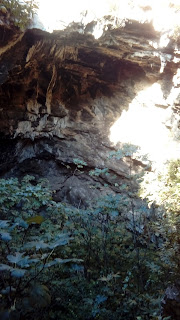 We invoked Our Lady of Chaos. I left my golden apple sacrifice, then I turned back and photographed it. Immediately I knew that was not a good idea; this is when it became a bit more serious. This had to be a ritual from which I took nothing home with me, including any images of what I was leaving behind. I deleted the shot and felt better immediately.

The fact that deleting the shot seemed so important I take as a good sign: I was engaging more seriously with Eris. That working, and then returning home and getting together with Discordian friends made me ask: What is it we are we doing with Eris? Why do we honour Her?

Eris is not a friend of sensible planning, the kind of thinking that is based on the assumption that things are always going to be as they were. Of course, we humans need to live in that kind of world, it makes us feel secure, lowers our stress and conserves our energy. This planning kind of thinking is our bread and butter mentation, and we identify with it, so that it becomes our dominant selfhood, our ego. Which is why we get annoyed when our plans go tits up.

But we are not always in control, not always living in a predictable world. We also need to be able to deal with confusing, complex situations, and quickly. This is a different kind of intelligence to that which assumes things and plans accordingly - this is the intelligence required to steer a speeding vehicle on a dangerous road, or to confront and be effective in situations where predicted and comfortable structures break down.

The Greeks had two words for time: kronos, which is the predictable, calendrical idea of time, and kairos, which is the moment of opportunity that requires an instant response. They also had a word for the cunning, fast intelligence that has the flexibility and lightness of touch to be able to seize the kairos when it presents itself - metis.

So when we honour Eris, not only are we honouring life's chaos and unpredictability but we are also invoking metis, the cunning that will enable us to make the best out of the chaos that's going to happen at some stage whether we like it or not.

It seems this kind of approach to magic is not for all magicians. A few years ago, senior Chaos writer Pete Carroll opined in conversation that working with Eris had led to conflict in the ranks of the chaos magic world, so we should shift our allegiance to other deities. Not long after that, when Pete Carroll and Math Kaybrin's work EPOCH, with its beautifully-drawn deity and elemental cards came out, the authors gifted our chaos group with a copy. We decided we would have to select a deity chaotically, to honour through the new deck. A guest member suggested we remove the Eris and Loki cards from the deck before doing so. Nobody else agreed - surely not inviting Eris (let alone Loki) is precisely what leads to trouble in the first place? So we went ahead with our random selection and, guess what, Eris's card came up, and we invoked Her.

This rejection of involvement with Eris seems to me to be a strange thought process for a magician: surely we honour Eris because we know that life is full of surprises, conflict and turnarounds? And surely such an attitude of stopping pretending that we are always in control can only be healthy. Honouring the chaos and unpredictability of the world is also more likely to lead to experiences of higher consciousness, in which we learn to see the world as it is, not as our expectations paint it. Someone who rejects Eris is resisting incursions of higher consciousness, is resisting the recognition of chaos that is a necessary preliminary to any experience of consciousness beyond the time-bounded (in the kronos sense) ego. An attitude to magic in which one always has to be in control is bound to lead to disappointment, reduction in general pleasure in life and, if pushed to its extreme, some sort of breakdown in which the world proves to us that we cannot always be in the driving seat.

Eris might not always be a friendly face, but what deity is invariably friendly, if you look closely enough? Eris's face is beautiful, frightening, awe-inspiring, humbling. Her frightening face is the face of the world when we have to acknowledge that we can no longer control it. Her joyous face is the world that opens up when we stop pretending we're in control because we are fed up with holding on so tight, and instead let go into what is happening.

Behind the face of every deity is a facet of the cosmos as Other. If you engage with any deity deeply enough, your reward will be to see that totality gazing back at you. Maybe you will even recognize that gaze as a feature of your own divine nature.