This was a great day of energy work, healing work and discussion. Here are the notes.

***
If you would like advance notice of similar workshops, please leave your email address in Comments below or contact me at info@chaotopia.co.uk and I'll include you in mailouts.

Introduced ourselves. Talked about Varieties of Energy Work:  have y done: qigong? Rebirthing BW? Holotropic BW? This is related to all of those practices.

Talked about:
-         Energy magic, what is it? The energy paradigm in magic. The loss of a European traditional lineage for energy magic; we refer a lot to Qigong, and Prana work.
-         Connected Breathwork and Energy Magic.

Practical: Basic Energy Exercises:
Becoming aware of your Energy centres, Circulating the energy.
Sealing your aura for when you emerge into the world
Grounding, for when your energy gets too intense.

Practical: Raising the energy:
Loosen up, do Shaking.
Feel the shiver…

Do continuous, connected breathing, through the mouth, to a rhythm of 2-6 or 1-4.
Experiment with the length of inhale and exhale.
Breathe from your abdomen for the best results - if you're not sure where you're breathing from, place one hand on your belly and one on your chest - only the belly hand should move if you're breathing abdominally.

Entraining the Energy:
Breathe in, from the earth, your feet, up your body with the inhale.
When you have a good rhythm established, introduce this visualization: the energy flowing up from the earth into your feet on the inhale, up your body to your head, changing direction with the beginning of the exhale to flow down your arms to your hands.
Keep going till you feel it in your hands.

Continue this for 10 minutes, to learn how to sustain this level of energy.

Feedback time:
Stop the exercise and breath gently and slowly. Take stock.
Sensations like dizziness may arise – these are harmless but may be disturbing.
Feedback.

Practical: Elemental energy:
Go outside, walk to the woods.
Repeat EHB exercise (as above).
Walk about, watch and feel.

Feedback time:
Discuss what we felt from trees, sky, etc.

Practical: Moving the energy:
Do the EHB. Move around.

Get into a circle, still keeping energy going.
Pass energy to person on opposite side of circle, entraining it to flow between our heads and feet, then to all in circle.

THAT was a Chaotron! We can come back to that if you like, later.
But for now, let’s do some HEALING

Practical: Healing:
Call for volunteers.
Stand round and direct energy at them.
Move closer, place hands over sites where energy is needed.

Practical: Chaotron again – 25min, remote healing, each choose own recipient.
At end of this, did films  (Story of smoky-light entity round neck of man in exorcism)

Posted by Dave Lee at 12:27 No comments: Links to this post

The following is the text of the notes I used. I am very prone to improvising, so this is very much the bare bones of the event.

The Runic Attributions handout at the end is the Spanish language one used at the workshop. An English language version is now available. Please email me at dleeahp@inbox.com for a copy of it.

I shall soon be offering some new magical events; as well as my occasional workshops, this will include online events, coordinated workings, and webinars at some stage.

My first commitment to the discipline of magic (as distinct from youthful visions) was to Chaos Magic.

My second was to the mysteries of the Northern way, the way of my ancestors, and of the runes.

The relationship between these two aspects of my magical world can best be illustrated by this glyph [SHOW cover of Bright From the Well] which is also scribed on my skin.

How it breaks down is as follows: All round the outside you see the familiar Sigil of Chaos, or Chaos Star. This is what most people will see of my magical world.
But at the core of the glyph is represented the symbol of my spiritual quest: the Valknut, the sign of Woden or Odin.

Woden is the Allfather, the god of the creation of the world through the act of the consciousness that is at the core of us all.
Whether we know it or not. Some, maybe all of you, know it.

As the father of all, he has many names.

Woden and Odin both mean Master of Inspiration or of wild ecstasy.
He is the god of any cults, one of which is a cult of poetic ecstasy.  One of his famous exploits was the recovery of the Mead of Inspiration, which is definitely not just a mug of drink, but the ultimate psychoactive sacrament that induces the controlled frenzy of the poet-magician.

Another of his names is Yggr, the Fearful One. Why fearful? You may have heard an old saying:  He who looks into eyes of an initiate feels fear, because he is looking at someone who has died to the mundane world, whose ordinary identity has been deconstructed, swallowed up by the terrifying ecstasy of the transpersonal.

Woden's best know exploit is of course the getting of the Runes. Woden is the god of the vitki, the wizard.
He hung on the tree, which is both the world and the spinal column with its power centres, its cauldrons of subtle force. He allowed himself to die to himself, like a shaman, he hurled his consciousness to the limits of the universe. He thereby gained the runes.
And he gave them to us.

Today I want to share with you an experience of working Rune magic. An experience of raising consciousness to the ultimate and going beyond, into the realm of magic.

2. Singing single runes
[Hand round the Rune Handouts - see below]

Take a look at the handout.

I have written in some well-known attributions, and a few less well known that I have found myself.

Each of us, in working the Runes, must emulate Woden and find our own runes.
In other words, to work the most powerful rune-magic, we must load these ancient symbols with our own attributions.

We will only make the merest start on that today. But we have to start somewhere, and we start with these well-known attributions.
We are going to load these associations into the runes before us, by singing them as we contemplate their meanings.

Then we will learn how to combine them into special magical forms called bind runes.
Then we will do some operative magic, just for fun.

This singing of the whole rune-row is not just a technical exercise. The whole futhark was sometimes written and maybe sung as such, as an extremely sacred thing, an invocation of the all the powers of the cosmos in balance.

This was done with various versions of the futhark or futhorc - for instance on the Thames scramasax, a highly prestigious weapon on which all 28 runes of the Anglo-Saxon rune row were carved. Also on memorial stones for the dead, to consecrate their memory for as long as stones stand.

So I am inviting you to do the ultimate spell as well as to learn the runes.

The singing: gentle but rich.

[Sing them one by one]

Galdor is rune-song.  Singing is the core technique of rune magic - in fact, much of the Northern magical tradition is called galdor.
Runic enchantment is a flexible, subtle, sophisticated and extremely powerful system.

So of course it is ideal for Chaos Magicians. Chaos Magic and the Northern Mysteries go back a long way, but that is another story, not to be told today.

Each rune is like a colour, forming a spectrum. Each 'colour' is quite broad in meaning - look at the attributions of URUZ  .......


BINDRUNES
If we combine the force of URUZ with that of another rune, it narrows down the meaning.

This is how we design an enchantment with runes.

Simple combinations of a vowel and a consonant gives a whole range of Galdors:  for example, UL, LU, for healing.

The bindrune has a name, which is derived from the names of the runes that make it up, and it may also have a more intimate name: the entities created using bindrunes can vary from very simple wights, like servitors, to much more sophisticated spirits.

Traditionally, the bindrune is carved on wood, but I would like to show you a modern, Chaos Magic approach to runic enchantment too.

To give you an example of a modern runic spell, this is the basis of a spell to expose wrongdoing:
Made from words, taking the word EXPOSURE and writing it in a grid until it disappears. Cutting the shape of the Kenaz rune out of it; this Kenaz can now be sacrificed.

Construct a Bindrune using TIWAZ and DAGAZ.
Intention:  Justice for the people and the environment.

Two groups, one does Ti, the other does Da.
Start the rune song.
Make it quiet.
Tense up.
All do Ti-Da, release, and launch.
Laugh 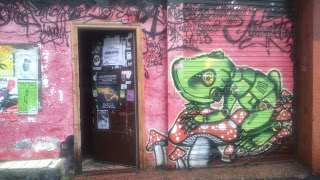 Other speakers at the event have placed their talks here:
http://theblogofbaphomet.com/2015/05/03/viva-espana/
http://www.thekitescradle.com/you-are-the-experiment/ 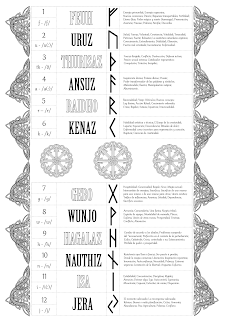 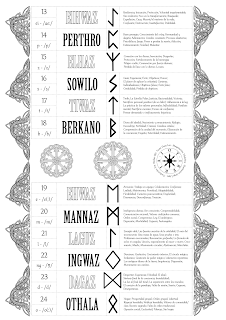 Posted by Dave Lee at 19:55 No comments: Links to this post