I've been going to this for years. It gets better every time, as I let the forms of this old dance sink under my skin. 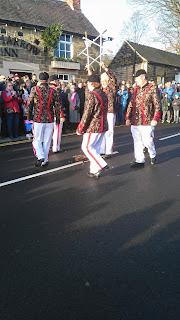 This year the wind is bitter cold, and Death turns up and helps stop the traffic (an important part of the preparation for the dance). I've never seen Death at this event before, so I suspect he's a freelance.

Today my camera is not working well, so check out this old blog post with some decent film of the dances: https://chaotopia-dave.blogspot.co.uk/search?q=grenoside

The Sword Dancers’ sequence involves two songs. In the first, the dancers hold each end of the ‘swords’ in a circle, then move round and through the circle in loops, stepping over the paired swords then raising them, until the hexagram form of the unconquered sun is produced and held up.

This seems like a cheerful form of the rhythms of work and frith, endless cycles under the calendar of the sun, the tune having a steady solid cheerful pace. With the second dance, the rhythm speeds up and swords clash – this is war. In the end, the resolution is the meeting of swords upright in the centre.

The weaving together of the dancers and thereby the swords forms a moving version of Germanic knotwork, the eternally-recurring forms of humans and animals woven together on the poles of life and death, the sacrifice of the king / the fox recalling ancient midwinter layers.

A book about the magical life done by IOT members. Also contains my History of Chaos Magic as an intro.
Go here and buy one, for the astonishing price of £8. Or an e-version for almost nothing. 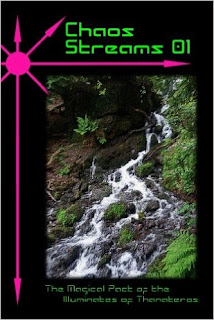 North, the Rise and Fall of the Polar Cosmos by Gyrus 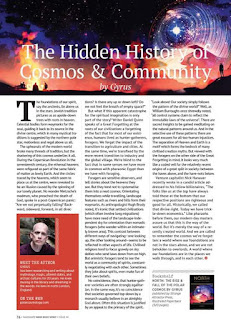 What would it be like if culture was completely different, if we had taken any of a number of different routes in our cultural past? Not many authors dig as deep as Gyrus has done in 'North', dismantling deeply-embedded cultural assumptions.

Sure, there are other books, and this is indeed a hopeful trend in culture; instead of tinkering or trying to patch up the mess we have at the moment, let's look at its very roots and see if we can detect the basic flaws in our worldviews. Morris Berman did it with his 1989 book 'Coming To Our Senses', in which he shows how cultural shifts rely on some kind of collective gnosis, some new and ecstatic apprehension of reality, and that this cultural shift is not always a benign one. More recently and coming from a slightly different direction we have Nikki Wyrd's essay in which she suggests we abandon the primacy of 'higher' in her blog piece Dionysus' Doorway (https://theblogofbaphomet.com/2016/05/08/dionysus-doorway/ ).

On the cover of 'North' is a vortex, and the main text is sandwiched between two halves of an Extraordinary State of Consciousness at a Glastonbury festival. The core of the book takes us to where we can begin to see the underpinnings of our cultural assumptions; starting with Fire, where the rising sparks of a blaze point us to Sky and we encounter the first binary, earth and heaven. Once we have that vertical, we can divide up the surface of the earth, and we get North. The vertical binary is then applied to the body, and we get Head. Then the development of Copernican astronomy gives us Revolution. After that, Ice and the mysterious icy poles and finally, Space and its relevance to our current myths.

This is a very dense book, stuffed full of references to things you're unlikely to have read. But that is probably inevitable when a writer casts his net so wide in trying to catch the very biggest ideas. By and large, Gyrus succeeds in this ambitious quest; his dismantling of culture is a superb corrective to the Golden Age Aeonic narratives - such as those of Julius Evola - that are trotted out under the banner of Tradition. North is a toolkit, and part of a growing trend of rejecting the bases of the cultural forces that have got us to the state we are in today.

The link at the top is for buying the book (which I definitely recommend if you are interested in cultural transformation) but is also a whole website and blog devoted to the ideas in this book. Check it out. We have not heard the last of these ideas.
Posted by Dave Lee at 12:59 1 comment: Links to this post 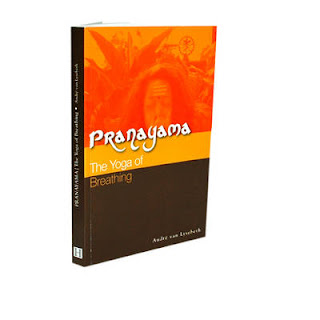 (I was going to plug the business I bought it off, M and J Books, but they have no detectable web presence at all. I encountered them via the Amazon UK portal. So this link won't take you there: https://www.waterstones.com/book/pranayama/andre-van-lysebeth/9780955241239 )

I only found out about the existence of this book recently, even though it was first published in 1979, via a footnote in another book I was reading. My reference treated it as a classic, and I can see why. That's why I'm reviewing it.

'Pranayama' held a number of surprises for me. At first I was put off by some curious attempts to demonstrate scientifically the existence of 'prana'. As I show in my forthcoming book 'Life Force: Sensed Energy in Breathwork, Psychedelia and Chaos Magic' we do not need the blessing of science to work with energy sensations and further, that concepts like 'prana' and 'qi' do not map smoothly onto concepts from physical science.

But then it got better and better. It covers everything, really: useful basic advice omitted by many texts on pranayama, from the control of abdominal muscles and the use of nostril-flaring to get the sensed-energy feeling through every kind of pranayama you'll have heard of and a couple you might not. It is written by a Westerner, but from a traditional perspective, making it valuable in terms of preserving Indian teachings which sometimes get lost in Western interpretations.

If breathing work interests you then this book is a must.

New edition of The Nine Doors of Midgard, by Edred Thorsson I first read this book in 1996, when I joined the Rune-Gild. It is the training manual for that organization, and presents a scheme of self-initiation via a lengthy and thorough programme of work. At that time I bought the Llewellyn edition, one of those books where they use vanishing glue on the spine and so it eventually becomes loose leaf. Then for some time it was only available as a Gild internal document, so the new edition brings this extraordinary work to the wider world in a form which does not fall apart.

The scheme is very thorough, and amounts to a daily practice that you build up from a progressive menu of workings, new ones introduced in each of the 9 sections or 'Doors'. The work includes daily rituals, rune contemplation, magical diary (PAD or personal analysis diary), Germanic soul lore, breath and sound exercises that lead up to operative rune-galdor, the carving of runes leading up to the creation of runic talismans or spells, how to do rune-readings, energy circulation using runes and working with wights, both the lesser ones such as dwarves and the gods of Asgard. This scheme of magical work leads via the construction of a magical self (the Wode-Self), the composition of your own Rune-Poem and a brief introduction to seith, including utiseta ('sitting out' to discover your fylgia-animal) to the writing of your Master Work.

There is also a very useful reading list for each Door. The whole thing will take you at least three years and is designed to take you to Mastery, which is where your mentoring Rune-Gild Master and other Masters of the Gild declare that you have reached a stage where you are expected to teach. Thus the Gild maintains a high standard of transmission of magical learning.

If you are at all serious about working in the Northern tradition of magic, then you need to read this book.