Welcome to Paradise! and... Westworld? and Midsommar? Ozora Festival

It's evening, and very warm at Budapest airport. We get on the minibus shuttle - it's for Ozora Artists. Here's I'm an artist - I'm going to speak on 'Psychedelics and Magical Energy' at this gigantic psytrance festival.

I have to admit my previous exposure to psytrance - two parties in the late 1990s/early noughties -was not encouraging. Naively, I was expecting 'psytrance' to mean 'psychedelic trance', but no-one was interested in psychedelics at all, only in pills and coke and squabbling over nitrous oxide hits. So I hesitated when I was invited to speak at Ozora, but not for long, because it did sound like something better than that. And it was.

I meditate on the long, winding drive, and it's exceptional. I'm in a bliss of trusting to a guidance that took me through each moment of experience, a silent knowing that was there in some of my teenage acid experiences but which I'd mostly lost since. I feel as though I've come home.

The festival has a giant entrance sign, welcoming us to paradise, and then an orange drive-through pavilion as the entrance. We get our wristbands and artist's lanyards and queue up for some chips. The festival at this stage is darkness and sound and confusion. We meet a friend, drink a beer and get another lift. The car is struggling with the hills, I'm beginning to wonder if we will be stranded in the middle of the night, but we arrive at our apartment in a village, Kisszekely, about 15 km from the site. I learn one Magyar word - koszi, thanks.

We breeze into our apartment some time past midnight, talking as we decompress from our journey, unaware that we were waking up flatmate Ayana Iyi, who's also talking at Ozora, on psychedelic witchcraft.

The next day it's hot. I'm beginning to wonder whether it was a good idea to opt for the off-site apartment, it being so far from the site, but it's no problem - the Ozora staff are happy to give us lifts to and fro at any time of day or night. I've never had such great treatment from organizers. This is the day of my presentation, so we make our way to Chambok House, where the talks and discussions take place.

My talk seems to go down well. I'd no idea how many people to expect or what level of interest; I'm guessing 50, but it's nearer 200, and people are enthusiastic enough to get up and do some energy work. People reported amazing states of consciousness and one person got healed. The next day, a participant came up to me and told me how she'd used a chi-ball energy portal to find the man she'd been looking for. All in all, one of the best audiences I've ever had.

Now we've got a chance to explore the site properly. Catching sight of the timeless traditional architecture of the Artibarn, I'm suddenly in the film Midsommar, in that beautiful reconstruction of an ancient heathen village (before they start offing people). 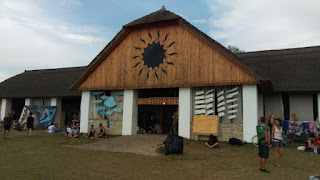 After music, art is the big thing in this festival. The land is owned by a rich Hungarian chap who loves the psytrance scene and many of the structures are permanent. Art events are on all the time. Walking across a field, we hear what sounds a bit like a warm-up for the Anvil Chorus from Das Rheingold - it's some people improvising around the sound of hammer and anvil. 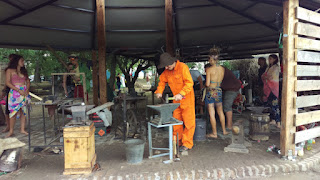 The Mirador art gallery is a tower, filled with a stunning display of psychedelic art, so good we get overloaded and have to pause our viewing for a day. 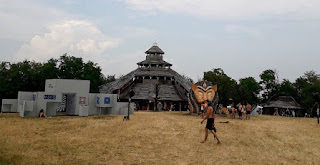 Climbing the tower gives fantastic views all round the site. 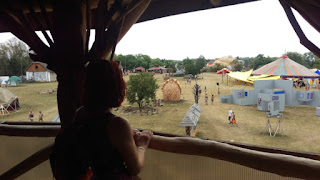 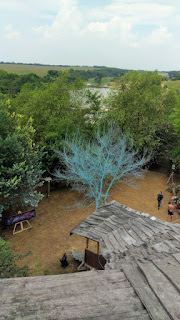 And right in front of it is a Cat Temple. 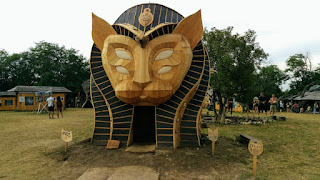 Then we get the biggest visual shock of all. From the Mirador tower we have a vague sense of the main stage field behind the trees, downhill. So we start down some wooden steps that drop about 200 feet between platforms. As we emerge from the trees onto the first platform, we finally see the main stage field and gasp at the sheer scale of it. Judy says, 'It's like Westworld!'

Later I'm back at Chambok House for the panel discussion, alongside Kilindi Iyi, Dany Nemu and Ferdinando Buscema, discussing 'Magical Psychonauts: Intersections of Magic and Psychedelics'. The room was packed, and the questions were interesting. Magic, or at least the possibility of it in people's minds, is thriving in this subculture.

The next day it's really hot. Dancers walk round with those 5 litre garden sprays you pump up then release a fine mist. It's very pleasant for us, probably essential for people dancing in the 29*C sunshine. This is a scene where people look after their health and each other's. There's plenty of nice vegan food, no need to eat meat-industry waste disguised as burgers. We drink beer, for the heat, but not very much. There is almost no drunkenness on the site. I see one bloke staggering down the hill shouting and waving a bottle, but he is conspicuous by his rarity. We don't see any of those lairy packs of lads, pissed and coked-up, that infest most public gatherings.

In the evening we go to one of the smaller stages where the most interesting music is on to watch Tentacles of Static, an Ozric Tentacles reincarnation. They're great, playing against the spectacular backdrop of a thunderstorm which at first we think is a light show and distant sounds. The rain comes down thick and heavy. We just have to walk through it to our lift for the night, soaked to the skin. Back at the apartment, we chat and smoke with Xenia our driver and Alana. 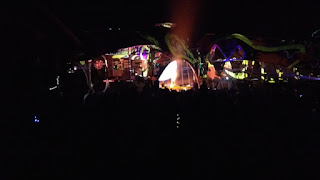 The next day we check out the Dome. In the daytime it looks a bit like a gigantic WW1 German helmet with its low curving brim and spike on top, all made of thatch. By night, it's lit up with the most incredible lights inside and out.

As we walk in, we're hit by a gust of air laden with the unmistakeable tree-resin-and-petrol aroma of acacia DMT. People are lying in hammocks, in this loud, immersive chillout music, watching projections on the ceiling. We have arrived in the final realisation of Wagner's dream of the Gesamtkunstwerk - the total artwork, total immersion in artistic vision.

For Friday the forecast says thunderstorms, and they're not kidding. We're trapped in the bar for the first part of the day, while the rain buckets down and puddles become ponds. Since that experience on the minibus on Monday, it's easy to meditate with eyes open, switching into silence and eternity. A stylish couple sits behind me. She looks like a Japanese aristocrat; his face is Samurai, from an old print. 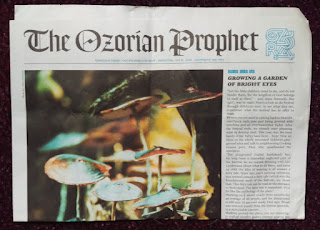 We check out the Ozorian Prophet, a daily print newspaper with news and interviews with people on site. It's a jolly publication, a bunch of good vibes, but a bit deluded in places - one of the articles has someone claiming there's no single-use plastics in the food area, someone who clearly has never had to use any of the bins on the site.

Eventually the rain recedes enough to escape the bar and wander. We see people building flood barriers and cutting drainage ditches. A truck appears and dumps sand on a major route. This site is being really well looked after. I get the impression that the organizers are actually spending a lot of the income on keeping the place nice. It's cheaper than Glastonbury for 6 full days, and much better managed.

We're back at Chambok House for a panel discussion on psytrance. I find myself agreeing with the  Australian DJ who says psytrance is too repetitious, a 'rectilinear steel prison.' The American DJ defends it, saying the insistent 'machine-gun beat', was essential to keep the trance going, or you get broken out of the trance. The repetition is a 'a warm blanket, a comforting thing.' It's clear that we are talking here about an actual technology for getting higher, based on the relentless monobeat. I mean, whatever floats your boat, but it's not my thing, that repetition. I prefer shifting, swirling rhythms that take you off in new directions, exactly the kind of thing that the Australian guy is saying are now 'transgressive' and 'forbidden' in the psytrance world.

Later, we take in a set by Youth with Gaudi on the small Dragon's Den stage, exactly the kind of 'transgressive' beats we were talking about this afternoon. This music has delighted in techno, dub, trance and drum-and-bass, and folded them all together into complex, shifting rhythms that are a joy to dance to. It begins to occur to me that the best way to understand the psytrance scene is that it's a church. Its sacrament is the 'warm blanket' of the monobeat and its limiting of the wildness of psychedelics, the collective ecstasy is signalled by people raising their hands at the climaxes of the music, its creed is caring and inclusive (insofar as any church can be inclusive) and its faith is that its beliefs are better for the world than the dominant ones out there. Which seems perfectly reasonable.

It's the final full day on Saturday. We've enjoyed some intense conversations in the car as we were ferried back and forth, on topics such as small-scale farming, the history of the region, working as a translator of Russian for the Hungarian government, children and psychedelics, and yoni balls. Today is much cooler, and I'm enjoying a major sacrament, so I'm doing fire breathing all day. I discover that each breath is a recapitulation of cosmology. That's maybe a story for some other time.

On Sunday it's time to go home. We wait in the Artists' Camp for the airport shuttle. I give my lighter and my last two joints to the man behind the transport desk, and he's delighted.

I never did well with churches, and psytrance dancing is too High Church for me - too prescriptive in its approach to gnosis. However, it was nice to worship with this congregation for a while; on the Saturday I danced to Youth's 'History of Trance' set, and I got the psytrance gnosis. And it's a nice congregation. Humans do religion; this is one of the better ones.

Ozora festival was much, much more than psytrance, and far better than I imagined. It was, in the end, one of the best festivals I've ever been to. Big thanks to everyone who made us so welcome, and to Giorgia for inviting me in the first place.

Posted by Dave Lee at 23:57 No comments: Links to this post