December 28, 2012
We arrive at about 10.30, get a drink and stand in the street with about twelve other people. Suddenly there are 100 people here, standing alongside the road, cars passing every few seconds. The many dogs start a chain reaction of barking. There's a tangible buildup of excitement. I'm wondering how the road is going to be blocked, because it's clearly going to take place right in the road, when we all step forward into the road and take command of it. Wow.

This display of people power is in response to a team of 8 men in white trousers and very fine brocade jackets marching down the road and into the centre of what is a now a circle. 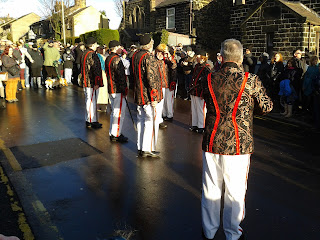 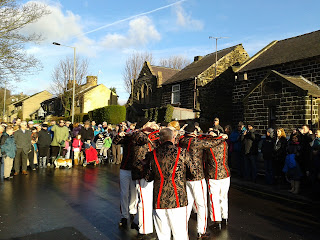 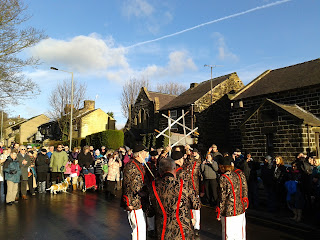 A fiddle starts up, and straightwaway a basset hound standing at the front of the crowd joins in with some howls. The crowd roars with laughter.

The next team is a women's dance troupe called Lizzie Dripping, announced as 'from Sheffield'. This underlines the fact that we are indeed not in Sheffield, but in Grenoside. Then a troupe of sword dancing women from Maltby called Mums and Daughters. Their style is decidedly different to the Grenoside men. We are in the midst of fierce local pride! 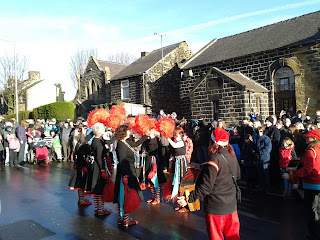 There's a solo dancer who does a Scottish dance to a new fiddler, then a sword-dance troupe of young kids. This is clearly not a dying tradition, or a precious, academic revival. This is a vital, living tradition, and those present range from rug rats to the very old. The children's troupe have wooden swords and perform the elaborate stepping patterns to the tune of Bobby Shaftoe. Even smaller kids play dance. 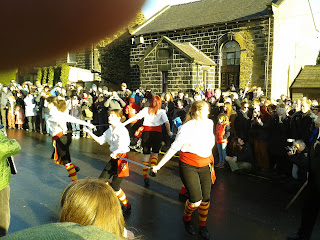 The raising of the hexagons and pentagons of swords really feels like a solar rite, a welcoming back of the sun after midwinter. It's cold - the fiddlers are having trouble keeping their fingers warm enough to play, but the day is wonderfully clear and bright, and the sun shines warmly. This is a great way to spend the 26th of December. 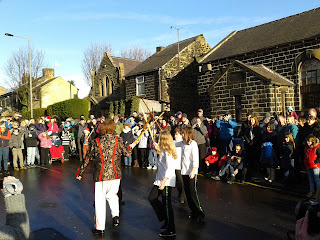 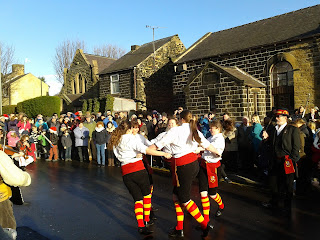 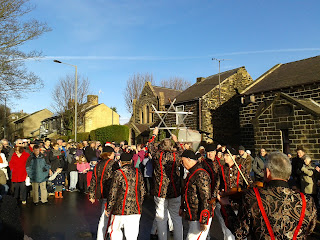 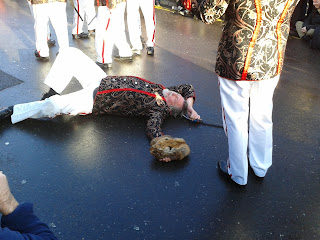