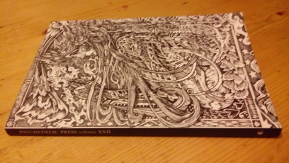 The stated theme of issue 22 is the integration phase that happens after a psychedelic experience, the delicate protocols of coming back to the world. The articles 'all play with this theme in various ways'. PPJ in general plays with themes as a way of structuring the vast surge of psychedelic writing that is emerging at the moment, in science, literature and other areas. And it does this very well; I wholeheartedly recommend it to anyone interested in psychedelics and the culture and issues around them. It has an immensely readable mix of academic-type discourse, trip reports, poetry and history.

This issue has two outright trip reports. Julian Vayne writes this issue's My First Trip, in which he tells a hair-raising tale of taking 4 times as much LSD as he intended to, how he dealt with a rather intense metaphor that erupted into the trip, and what he thought about it all afterwards. Sam Ross's 'AnOther Dead Hippy ReBirthday' is a lengthy and thoughtful mushroom trip report, much of it in free-form verse. I know... the times one has gazed with dread upon such writings... but fear not, this is very good. His warped language gives the precise feel of that stage of a trip when your speech centres just feel like molten plastic. Writing of the fabulous lichen he ignored on the actual trip then went back to engage with, he comes up with a beautiful and powerful notion: 'I went back and found, among the many trees in that small wood, the very lichen (I am sure) and I contemplated it and documented it and together we processed each other into art.'

In the arts corner, Aaron Oldenberg in 'Altered State Machines' writes of computer games which attempt to recreate some aspects of a salvia divinorum trip. This idea was a genuine novelty for me - my contact with computer games is pretty much limited to a single, decades-ago experience of playing Sonic the Hedgehog and wondering what all the fuss was about, followed by a suspicion that some games were actually interesting enough to waste too much time on, time I'd rather spend reading. It seems things have progressed a bit since then, and I look forward to trying out something like this.

One area of the politics of the psychedelic scene is covered by The Rev. Danny Nemu, with an engrossing report on the divided worlds of ayahuasca. Danny's writing gives a real sense of knowing what he's talking about because he knows some of these people. Anyone who has wondered about the different 'rules' for the use of cannabis with ayahuasca has something to learn from this article.

In the area of magical technology, Elio Geusa offers 'Master Plant Dieta', which is just the medicine for those of us who have been wondering at the apparent variety of pre-ayahuasca 'diets'. He distinguishes clearly between the health and safety issues that are covered by the avoidance of certain foodstuffs and the spirit-magic practice of relating to the spirits of various cleansing jungle plants.

Rob Dickins reviews 'The Tawny One' by Matthew Clark, a view of the constituents of soma that is much more believable than any I have yet come across.

And finally the history slot: our very own British acid historian Andy Roberts reminds us that, back in the day, flying saucer imagery was widespread among British trippers. In fact, it was so ubiquitous I'd kind of forgotten about it. Which is why we need historians like Andy to draw posterity's attention to these things.

One thing I love about PPJ is that it is not beset by the rigidly dogmatic scientism of some psychedelic discourses, the sort where any mention of inner work, transformation or awakening is sneered at. This is because it is run by interesting people, including freaky people such as magicians, who recognize and do not dismiss the multiple realities opened up by the psychedelic experience. Maybe PPJ will play a part in saving psychedelia from becoming too straight when psychedelic medicine goes mainstream!