Showing posts from November, 2018
Show All

The Sacred Mountain and the LSD Helicopter - a talk

November 30, 2018
This is the talk part of a working I presented at Manifestations, the IOT+friends event in October in Sheffield. A very kind person with much better tech skills than me (and who has chosen anonymity) has kindly improved the sound!
Post a Comment
Read more

Ruthless Angels: review of Jason Louv - John Dee and the Empire of Angels 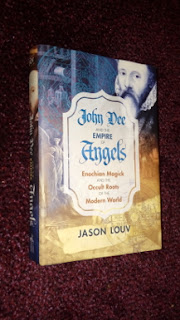 Jason Louv - John Dee and the Empire of Angels; Enochian Magic and the Roots of the Modern World. Back in the 1980s, I and a few friends worked the Enochian System of John Dee and Edward Kelly (see my Tales of Magic, episodes 17-21, soon to appear on https://iotbis.wordpress.com/author/iotbis/). It is a system of staggering detail and complexity. Not to mention the distortions and baggage introduced by MacGregor Mathers, which have made it hard to know where to start. One of my co-workers once said: It would take a whole Enochian University working for a hundred years to work out what all the potentials of this system are. And that was just the technical, magical aspects; we had little idea then of exactly how important Dee's work was in creating the world we live in now. Louv's book makes a compelling case for the angels that Dee and Kelly channelled having a profound influence on both the British and American empires. And that's just for starters. This is a rich,
Post a Comment
Read more
More posts