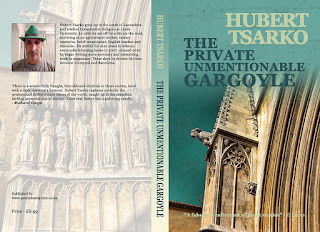 This is Hubert Tsarko's first collection of short stories, consisting of tales from the early 1980s and later set in rural France, Greece and Spain.

The first story sets the scene. It's told in first person, with the author leaving his bedsit in Leeds for France in 1980, somewhat down with his life and wanting something new. He is already commenting about how travelling changed him when - 'with so much exposure to the real world my personality was changing and I was now less inclined to do what people told me.'

Hubert, aka John and I go back to the Leeds magical scene in the late 1970s, and I travelled with him for just one summer, in 1982. He is better known as a poet, but he has also been writing short stories for as long as I've known him. He writes engagingly of that first homesickness, that lonely, uncomfortable feeling. The loss of his sleeping bag right at the start of a journey, the criminal drivers who pick you up only to steal from you, or share their spoils with you, unwitting psychopomps extracting an entrance fee to Europe's underworld. This is the familiar emotional territory of leaving one life behind and beginning another.

The stories then mostly move into third person, giving a bit more distance and introducing all those themes of la vie routière with its drinking, its loves and its bizarre friendships born out of the economic necessities of following the next job.

The distress that often accompanies this lifestyle is suppressed by booze and rears up in hangovers in which the abyss yawns: 'When he woke up on the dusty mattress he felt like shit, his faculties clouded by a sense of abstract doom.' ("To The South")

What is this vagabond lifestyle all about? 'Interesting experiences', adventures that range from sleeping under a tree after a lunchtime on free wine to helping with a failed bank robbery in "The Madman of Mancau": 'Don't worry,' he repeated. 'There's no big deal about a bank robbery in these parts.'

Part of the drive is a search for an authentic identity:
'I was a language teacher,' I said, 'but I gave it up.'
'So now you rough it like this.'
'Now I don't have to put on an act.'

And what we all do, one way or another, try to pretend we are eternally young. But it catches up with us: 'one season older and nothing to show.' So the traveller periodically seeks more order, but falls back into chaos.

The instability of the travelling life sabotages any attempt to find love that's more than a two-night stand. In some ways, these stories of migrant workers from the 1980s, an era that seems so distant now, foreshadow the world of gig economies and mass migration that the present generation is growing up with.

These tales are very well-written, with a vulnerability and occasional dark humour, a solid descriptive groundedness on which the author builds poignant reflections about life. Hubert has got a great ear for language, with well-judged inclusions of foreign words - Greek, French, Spanish and Romanian - that add nuance without obscuring anything.

Some of these tales I've read before, but this is the sort of writing that gets better the more you read it. Is it the case that nothing much happens in these stories? No - it's life happening, often with no discernable plot. The stories belong in a collection - they have more power taken all together. This collection contains the questions distilled from half of a man's life, the unanswered ones building up like silt as the incidents come and go and the years wear on.