May 21, 2020
My passport to the afterlife in the People's Pyramid arrived a couple of weeks ago. 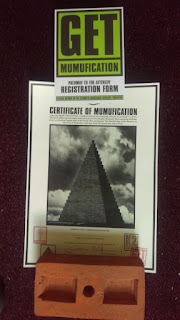 When I die, (which I’m not planning to do in the near future) a sample of my ashes will be placed in the hole in the middle of the brick, the brick re-fired and then used in the building of a People’s Pyramid in Toxteth, Liverpool.

I considered getting a berth for my ashes in a modern longbarrow such as this one. But as much as I love the long barrows, having done a few nights of exceptional magick in West Kennett, it feels as though that boat sailed about 4,000 years ago. At that time, my bones would have been buried under the floor of a chamber in which my kin would have danced and sung through the night of Midwinter, inhaling psychoactive herbs off of hot rocks. They would have emerged at dawn, renewed, ecstatic, their covenant with our ancestors renewed and completed for one more year.

No such option exists today, so instead my remains will become part of an art project, in an urban environment, in the company of other weird, dead people. Cauty and Drummond’s pyramid is grounded in the reality of funeral experience by Green Funerals’ Ru and Claire Callender . My remains will be in good (dramatic) hands.

Here’s a picture from last year’s Toxteth Day of the Dead. For various reasons, I wasn’t able to get to 2018 or 2019’s pyramid building ritual there. Hopefully this year, lockdown permitting, I shall walk the streets of Toxteth with a fine selection of weird people, contemplating death and immortality. 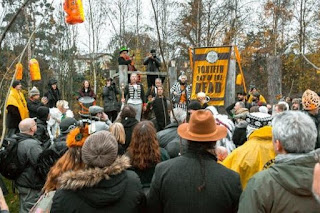 This decision came about because I decided it was about time I made a proper will. This was nothing to do with the plague; my intuition tells me I’ll get through at least this phase of it OK, but the pandemic had freed up some spare time, so that I no longer felt I could go on making excuses to postpone getting this stuff together.

The will was signed during lockdown, immediately following on from one of those Thursday evening ‘clap for the NHS’ street events. I signed the will, witnessed by my two Discordian neighbours, on top of their wheelie bin, in the street, preserving social distancing. A proper Discordian will-signing ceremony, Hail Eris!

Once I’d written my will, I decided this was the perfect time to consider my other end-of-life provisions, top of which are of course the arrangements for my funferall, as Joyce called it. It was an interesting couple of weeks, arranging to donate my body to the local medical school where, as it happens, a friend of mine is currently studying, and then arranging for the remains to be cremated and sent to Messrs. Cauty and Drummond to perform their ceramic alchemy with. A couple of weeks in which I thought about my death daily, in fairly concrete terms. It did me no harm at all. I’d recommend it, especially if you can get excited by your posthumous involvement in a public work of magical art.