I’ve been planning to write something about the weird and unpleasant phenomenon of QAnon for some months. I thought about it rather a lot because once I’d heard about it I felt as though I’d stepped in a puddle of cultural diarrhoea and couldn’t turn anywhere without smelling it. So the only way forward was through - I needed to read and think about it until I felt I’d got my head round what it consists of and why it attracts people. It turned into a much longer piece than I’d originally imagined, so it’s now too long for the newsletter and it’s here instead.

So please forgive me these ugly metaphors for an ugly thing - here comes the boot-scraper, a Tinfoil Hat Watch QAnon special - the Cultural Diarrhoea Puddle.

The best lack all conviction, while the worst

Are full of passionate intensity.

- W B Yeats, The Second Coming

I’ll assume that the reader already has some level of familiarity with these ideas, so hopefully you’ll know what I mean when I say it’s baffling and frustrating when you see people grasping some elements of the horror of the modern world - entering what RAW might have called Chapel Perilous - and then getting it so absurdly wrong.

I mean, if you don't strongly suspect the existence of a hidden level to governance that serves the ultra-rich — a Deep State if you like - then you just haven’t been paying attention since 1963. The JFK assassination was followed by an absurdly clumsy cover-up that pointed, with a giant neon finger, straight at the existence of something that could definitely answer to the description Deep State.

Similarly, the paedophilia in high paces thing is obviously the case - how else did Jimmy So Vile get away with it for about 40 years? A friend of mine lived in a property rented by him in Leeds in 1976 and everybody talked about how he was a child molester. Presumably he had so much on people in high places that he had become invulnerable even by then. Looking at the ’suicide' of Jacob Epstein in gaol, something similar is obviously going on there.

But to go from this perfectly reasonable level of awareness of conspiracies to the idea that Groper Dump, a man who is a perfect representative of the vulgar and stupid end of the billionaire caste, will save us all from the Deep State and their paedophilia is about 3 million steps too far.

So how do people get there?

I think the idea that it is a LARP is a brilliant insight. That narrative goes like this: People start playing (called ‘doing research’) and, like the people who re-enchanted their lives with the fiction of Ong’s Hat (see a previous newsletter) get sucked in until they can’t tell that they’ve left this planet.

But what is the emotional fuel behind such an eyes-shut-tight step, why would anyone want to sacrifice their powers of reasoning in such a way?

Clearly, the world is a very confusing place now. When mainstream media that used to be respected - such as BBC News - are generating stuff that is indistinguishable from fake news, who can we trust for our picture of the world?

I think loneliness is a massive part of it. This phase of capitalism plus lockdowns have resulted in people being more isolated from face to face human contact, I’d imagine, than at any time in human history. So we turn to new sources for our pictures of the world. Driven by pain, we hope to pick up some simplified and emotionally satisfying picture of the world… so we are vulnerable to stuff like QAnon. It gives us people to play with, a sense of justification and a faith that something can be done about all this evil, that soon all this will be over, the paedos will be gaoled and in some secular rapture those in the know will be vindicated, lifted up by the Groper’s victory.

When I got that, I felt compassion for the lonely, disorientated people. I mean, imagine facing this nightmare world without anyone to love and trust.

But what gets me are the New Age people who buy into it. I hear that the Diarrhoea Puddle is big in England’s New Age capital Glastonbury.

At this point, my compassion runs dry. Glasto New Age people are typically educated, relatively privileged and part of a community; what shit is going through their heads to buy into this evil crap?

Erik Davis first alerted me to this weird twist, which sees to be part of something that’s got named Conspirituality.  Do check out his Burning Shore newsletter - subscribe HERE.

Davis is someone who swims in weird worlds. I think, like me, he is a proud freak. But even he is getting weirded out by the sheer scale of the current weirdness. He writes about the day of the Groper’s bungled insurrection:

‘What I want to linger with now is the sheer, frightening weirdness of this eruption of the American id. On January 6, it seemed that some retaining wall of political ontology had collapsed. Alongside the shocking violence, we also witnessed a dark tide of metaphysical mud, pressurized by trance states, paranoia, and online feedback loops, erupt upon the decorous stage-sets of American statecraft.’

Some shift I’ve yet to pin down has infected the Glastonbury New Agers and their ilk. I think the problem is rooted in New Age thinking, and its feeble lack of critical perspective. Terrence McKenna wrote:

"The New Age generally I find somewhat obnoxious because it’s a flight from the psychedelic experience. What you can safely say about the New Age; if a technique doesn’t work, they’ll proclaim it.’

There’s an intense denial going on here, a denial so passionate that it merits being called a philosophy - denialism. This kind of thinking is opposed to any official reality, even where that reality is obviously right. We are in the same zone as Flat Earthers.

This denialism shares some traits with magick - as magicians, we have to be outside of mainstream reality in order to function. But this denialism lacks one essential component of healthy magical thinking - a critical perspective.

Erik Davis recommends starting your own ‘inner superhero team’, with various personalities that represent different aspects of your thinking, and it must include a Sceptic. This is a restatement of Robert Anton Wilson’s Multi-Model Agnosticism, or the methodology of its slightly younger sister, chaos magic. This has made good mental health practice for spiritual people for decades now, but it seems that some people in the New Age fringe refuse to engage in such hygiene. In light of this mental soap-dodging maybe ‘NewAge’ should be pronounced to rhyme with ‘sewage’.

The takeaway here is: cultivate doubt; be suspicious of certainty. Don’t be the ‘worst’ sort of person from Yeats’s poem. Be like a chaos magician, even if you’ve no intention of doing any actual magic.

So does anyone recover from this mental Covid? Clearly, it’s difficult for people when they realise they’ve bought into something so patently stupid to let go of it. Here’s a rather moving account from someone who recovered. And a Twitter stream that follows similar thinking. 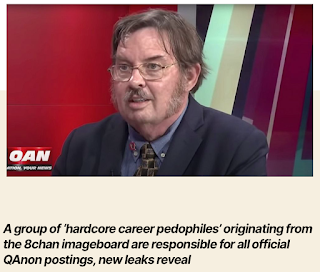 Finally, in case anyone fancies doing some magic to bring these people to justice or otherwise fuck them up, let’s call bullshit on the Anon part of this stuff; whose anus is this stuff actually dribbling out of? The perpetrators, as revealed by Anonymous, are almost certainly these people. 'Hardcore pedophiles’, eh? No surprise there, but a bit of classic misdirection.

See also this and this, if you want to read more about these scumbags.

Much magical power to you all!