I don't usually get involved with the politics of social media, or even write much about politics at all, but it'd be hard not to notice the disastrous takeover of Twitter by Elon Musk. I used to like Twitter - sure, it has always had a well-earned reputation as the platform for getting into rows, which is hardly surprising considering the loss of nuance a 280-character limit offers. On the other hand, that limit can be used to discipline yourself to create something approaching a haiku in its gnomic brevity. I'm not claiming that level of skill but some people manage it.

And you don't have to get into rows - if someone is rude or persistently stupid just block them and move on. (I am not writing this naively, but from the perspective of someone who was trolled for years by a demented creep.) Another Twitter upside for me is that there is (currently) practically no advertising, just a burst of sponsored posts every week or so. Block them and they go away. This is in stark contrast to my experience with Instagram, where my feed, just before I uninstalled the app, was about 65% sponsored, making it utterly tedious to use.

For me, Twitter has been a source of news links. I never watch TV news or read the newspapers (because it is all about learned helplessness, which is one of the worst things possible for your mental health), so I get my news by following up specific stories from links provided by people I follow, concerning which I might be able to commit to some action and therefore not get poisoned by helplessness. It is of course also useful for promoting my writings, courses and newsletter, though I’m really not sure how much reach a 1000+ follower-base is, when a lot of those could be inactive or bots.

So overall I'm disappointed that it's being destroyed by one man's narcissism.

Musk's thin-skinned banning of a number of his critics has earned him the name Space Karen, but it's worse than that. It's quite breathtaking how cut off from the real world the hyper-rich are. Remember R A Wilson's unpacking of the SNAFU Principle? The higher up in any organization someone gets, the less they know, because no-one dare give them information they don't want to hear. So imagine what it's like if you're the richest man in the world - nothing can touch you. Musk grew up mega-rich, has never taken a single step outside his diamond-hard bubble of privilege. And this is the result: he takes over a social media platform notorious for its argumentative nature and rejoices in turning it into a verbal bloodbath. He lives in some fantasy land where this is called 'free speech absolutism'.

'Free speech absolutism' - what does that even mean? That anyone can say anything in any context whatsoever? In face to face communication there are natural safeguards; if I’m being a dick, I run the risk of being chastised or slapped.

On social media those checks and balances aren’t in place, so instead we have moderation, someone overviewing the entire scene and making decisions about which posts are inappropriate. Moderation is always political. If it is done by community, it defines the community, and may be effective. If it’s done by corporate employees, it will depend on the culture of that company.

If you remove it altogether, you open the platform up to the most vociferous. And these people are not the majority - they just sound like that. To gain some perspective on who or what represents the majority, and therefore what might be a reasonable balance, check this Twitter stream about what UK people want. 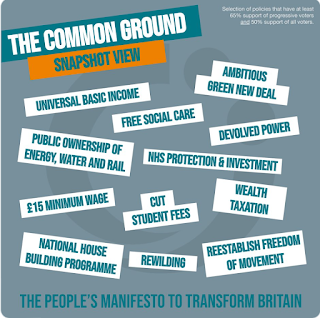 In a nutshell: 'Our study … shows that Britain is a progressive country crying out for transformational change. The British public is tired of the status quo and is demanding bold solutions to the crises we face.'

Similar statistics are available for the USA; most people want change that benefits the majority. So-called ‘libertarians’ such as Space Karen would have us believe the opposite, that there’s a majority movement for a less equitable society and lower taxes for the hyper-rich.

Back in the 1990s we used to say a libertarian was a Tory who’d been to a rave. A socially liberal rich guy. Now they just come over as crazed beasts - Space Karen sets his sights against what he calls ‘woke’, because he knows that stance will attract the racist ultra-right. Which is exactly what is happening: 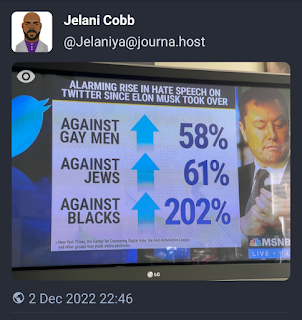 And why does he want that? A simple cui bono enquiry shows us: the ultra-right push narratives such as QAnon, and anything else anything that degrades the remaining public respect for democracy, already at an all-time low. This in turn leads towards the billionaire’s dream of zero taxes, zero responsibility, maximum power. When you’re that rich, it’s cheaper to buy your own army than pay appropriate amounts of tax.

So let’s not invest any hope in corporate-driven social media. William Gibson’s novel Agency, sequel to The Peripheral, is set in 2030, a year in which social media has almost completely died off. For a lengthier contemplation of that possibility, check out 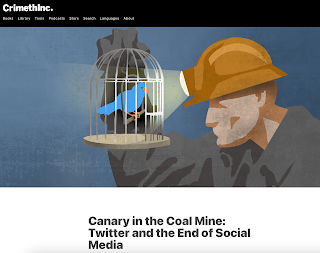 Twitter is probably dying, but the game is far from over.