Jeffrey Kripal's The Flip: Epiphanies of Mind and the Future of Knowledge 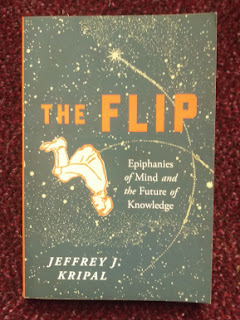 In about 1980 one of Robert Anton Wilson's books, I forget which, had a cartoon in it, of a hippie juxtaposed against a scientific looking type. The caption was: Hey man, are you only using half your brain? As an acidhead with a science degree, I liked this; it was part of the drama of early chaos magic, or at least that's how I saw what we were doing, combining the rigour of science with openness to magical experience. For too long, people had either been space cadets who'd believe any old flim-flam, as long as it had shiny bits and rainbows on it, or 'hard-headed' science types, who rejected anything they couldn't measure.

So when I picked this book up (as the result of listening to Kripal interviewed by Gordon White), I was already someone who'd been there, done that and worn out the t-shirt decades before. And I wasn't much impressed with the first couple of chapters, in which he writes about various scientists who'd gone through some epiphany or other, left behind their naïve Scientism and adopted a spiritual perspective. The kind of epiphany that frees the scientist from Scientism he calls the flip, hence the book's title. Sure, these were interesting experiences, but was this to be just another of those books that lists some people's weird moments?

No, it's more than that. A lot more. Kripal shows scientists who continue practising science without the dumb religion of Scientism, in which anything that you can't do in the lab doesn't actually exist, thereby deleting the majority of human experience. And he also shows how their philosophies are breaking new ground, even to the extent of giving us a glimpse of what a future intellectual culture might look like, with neither science nor magic and religion being rejected.

He outlines the ideas of a few key thinkers in flip-world, classifying the extent of their departure from Scientism. The first stop he notes on this journey is panpsychism, which is getting to be quite popular with scientific thinkers - not as the answer to everything but as something considerably more realistic than Cartesian dualism.

His second stop is dual-aspect monism, in which both matter and consciousness are aspects of a third, deeper principle. This is a philosophical standpoint with a lot of pedigree. It can also be seen as a favoured metaphysics for chaos magic, in that mind and matter both arise from chaos.

His third stop is quantum mind. Now I must confess to being a bit over most of the 'quantum physics = cosmic consciousness' stuff; that was being peddled back in the 1980s too, along the lines of 'Look, quantum physics shows you can believe in magic now!', and the metaphor is getting a bit threadbare. But Kripal follows Alexander Wendt in insisting it's not a metaphor, but that quantum metaphysics can rescue us from the prison of dualism.

His fourth metaphysics is cosmopsychism. He expounds the 'priority monism' of Philip Goff, 'the top-down view that the one and only fundamental entity in the universe is the universe itself, and that all conscious subjects are partial aspects of this more fundamental unified subject.'

The fifth and final, the furthest departure from Scientism, is idealism, the 'position that mind is fundamental and that matter is an expression or manifestation of some cosmic or universal mind.' This is another metaphysics with an ancient pedigree in both Western and Eastern philosophies. This is where it gets exciting. AI researcher Bernardo Kastrup writes of the role of imagination in forming the world:

'... in consensus reality synchronization emerges across the imaginations of multiple conscious entities, so to form a coherent shared picture. The constraints entailed by such emergent synchronization may be what we call the laws of physics. Perhaps the apparently fixed mechanisms of nature are merely an epiphenomenon; an emergent property of the sympathetic harmonization of different imaginations, imagination itself being the true primary substance of reality.'

Now that's my kind of talk. We can continue to do science without being Mr Stupid. Scientism is profoundly dehumanizing; Kripal defends the arts against Scientism's zealots who would relegate the arts to a secondary, unimportant human activity where in fact he shows the humanities to be prophetic in nature:
'In the humanities, the truths discerned almost always offend or violate the status quo and the comfortable... This is precisely why these truths are so important'

These shifts in culture will not be easy:
'I am certain that many will consider my emphasis in this book on extreme religious experiences and anomalous states of consciousness an eccentric means to argue for the future centrality of the humanities, much less the irreducible nature of consciousness. I make no apologies. We must be bolder. We must proceed through an intentional and systematic ontological shock if we are ever going to arrive at the future of knowledge.' [My emphasis]

This is where it gets exciting for the future of culture. Our present culture is Scientism-based, and its basic philosophy is that we live on a bleak prison planet where all that matters is individual survival and greed for more stuff. That culture does seem to be in its death throes. For the last few years, I've been asking myself what a culture could look like that had spiritual awakening at the invisible centre point of its cultural mandala.

The values I would see reflected in the culture include an attitude to the world that doesn't just see it as resources for humans to exploit, but as a thing in itself, a thing which has its own sacredness. A society in which human life is valued for its own sake rather than what people can produce.
A massive shift away from materialism.

This book has part of the answer: once we learn to value mystical experience and its implications for how the world really is, we will have to undo much of the intellectual world of Scientism. This will give us the opportunity to learn to live as what we really are. Kripal calls this cosmic humanism.

The Flip is a shard of a possible brighter future. What this future requires from us is a little optimism about the possibility of integration of science and spiritual reality. In these stupid and scary times, that might seem like a big ask. But it's what we need, and it's happening out there. Kripal shows how broad the movement is, how many professional scientists are making brave attempts to integrate their science with their cosmic experiences. Sure, these are a specialist subset of the population, but hopefully books like this can spread these ideas to lay readers.

Should you buy this book? Yes, if you're interested in science, in (readable and relevant) philosophy and want to think about what the next stage of civilization might look like. Yes, if you want to find real things to take heart about in the fertile chaos of the world.