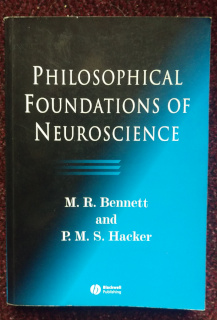 This book was written by a neuroscientist and a philosopher. I am qualified in neither of those disciplines, so I can't give it a full specialist review. But it was written for the non-philosophical public, especially neuroscientists. I'm sure I'm not on my own in consuming interpretations of neuroscience, so here's my two penn'orth.

Much of what scientists say about neuroscience is highly dubious; that's what this book is about - unpicking the meaningless statements that experts have made. The philosophy author, Dr Hacker, is a specialist in Wittgenstein-style analysis of statements and claims, and he is trying to return the interpretation of neuroscientific data to the terms of lived human experience, so that it actually makes sense in plain English.

I've thought for a long time that there's a lot of nonsense in what are presented as the 'findings' of neuroscience. We get headlines such as 'yes it's true we really do (eg - 'fall in love'; insert here any normal human experience) brain scans show it.' There's an obvious confusion of levels here, and the ideology of such statements is that we know nothing, and science knows all. Embodied wisdom is nothing, scientific discourse everything. Science will eventually know all (with sufficient funding, presumably). The underlying philosophical confusion goes back a long way, to Descartes, usually, and our culture's reluctance to go beyond his substance dualism.

So for instance, in stead of attributing behaviour or thought to a person, the writer attributes it to a brain. They write 'the brain thinks' or 'the brain decides' and so forth. This Hacker rejects as the 'mereological fallacy', the misattribution of the action of a whole to one of its parts.

This kind of thinking is not unrelated to the abyss that reductionism opens into. Not only are superfluous entities rejected, as per William of Ockham, but much of how we frame our experience is chopped away too. This is the kind of thinking that sets up a straw man of 'folk psychology' to slay, this being a false representation of ordinary language grounded in immediate, lived experience.

The most extreme tendency in this discourse is the eliminativism of such writers as Daniel Dennet. Faced with the so-called 'hard problem' of consciousness and its relationship to matter, instead of seeing that this 'hard problem' is an artefact of Cartesian dualism they proceed to deny the reality of anything called consciousness.

Fortunately, most people's minds reject eliminativism as a deeply flawed idea. The mental immune system knows it's nonsense. But because some people are convinced by it, Bennett and Hacker show us how to slay this chimera, by patient analysis of the language used. There's a whole appendix on exactly how Dennett is wrong.

It seems to me that much of the horror of the current culture is based on such anti-human notions, so eliminating eliminativism is an important philosophical task. Bennett and Hacker show that in fact the arguments for eliminativism are so transparently poor that only an ideologue would be taken in.

But that ideology is a terrifying thing, nothing less than the elimination of any respect for human subjectivity. Were it to succeed, it would be the triumph of the Expert, the High Priest of the deepest lies ever told - that your subjective experience is meaningless and irrelevant. Anyone who is not chilled to the marrow by this kind of thinking has simply not looked closely at it.

Such thinkers, the religious zealots of Scientism, want to squash the human world down to a tiny part of its true span, not in the spirit of bringing something up close to examine it - that's good science - but in the spirit of eliminating the rest, the parts that can't be fitted into the Procrustean bed of some dualist theory. This is part of a colonization of inner realities that was well under way with Christianity and continues forward into its offspring, Scientism. This colonization results in the destruction of the personal authority that comes from having a meaningful inner world. Which of course suits those in power.

I don't agree with everything these authors write. Their very approach is the sort that can slide into nit-picking, and it seems to me that that is what happened in their discussion on memes. This term was coined by Dennett's co-religionist Richard Dawkins and, although Dennett uses the concept as a tool to eliminate subjectivity, and they rightly criticise this, the term is quite a useful neologism. Also their arguments against a private inner world seem odd; it seems perfectly obvious to me that we do have private mental domains. Maybe I didn't understand what they are getting at.

I've written this review more to get the subject out of my system than to recommend the book. I read it because Alan Chapman recommended it to me after a discussion about the bearing neuroscience has on spiritual awakening, and I'm glad I read it. So I'd only recommend it if the stuff that neuroscience interpreters write annoys you as much as it does me in the way it so misses the point, and you'd like some tools to help them with their confusion, or blow them out of the water.