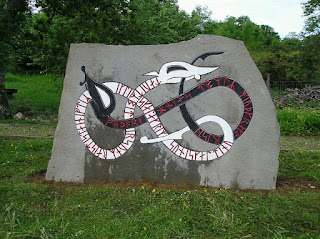 P D Brown is an accomplished poet, storyteller and runestone-carver, whose recorded stories are available here. His published poetry includes The Hidden Door. This is a collection of retellings of Old Norse tales; many will be familiar to those who love the Eddas, but you've probably never read them in carefully-constructed modern English that echoes the atmosphere of the original poems.

As he writes in the blurb:
'These retellings are in part prose, in a style of the spoken voice, for they were first composed to be told from memory to live audiences. The rest is narrative poetry, echoing the original use of verse-craft and "painting with the gift of speech".' 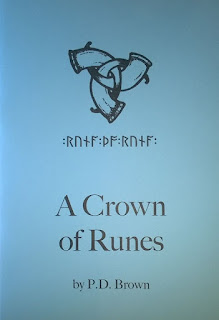 Last year he sent me his collection A Crown of Runes. The introduction contains a very brief guide to the three main historical rune rows, and an explanation of the title. The poems in this book follow the Anglo-Saxon futhorc, so they are 33 in number. They are all in sonnet form, which consists of fourteen lines with alternate or more complex rhyme schemes. A set of fourteen sonnets in which each poem ends with the line that will serve as the first line of the next poem is called a crown of sonnets. So the first 28 poems form a double crown of runic sonnets, the final line of the final poem being identical to the first line of the first. Ear, the final rune in the Crown, ends on:
A formless force, a power to expand.
- and this is the first line of Feoh.

The sonnet is a longer form than was employed in the traditional rune-poems. This gives the poet space for reflection and PD uses that space to reflect on aspects of the rune that impact on modern life; you may, as I did, recognize your own thoughts in many of these verses. This makes these poems quite unique.

Why is this book important? Because by expanding our idea of how we can write about runes, PD makes them more vivid for us. The Crown shows us a new way of relating to these ancient signposts to mystery, a way which is closer in time and culture to us than are the original, early-mediaeval verses. Such an approach revitalises both the runes and the sonnet form. 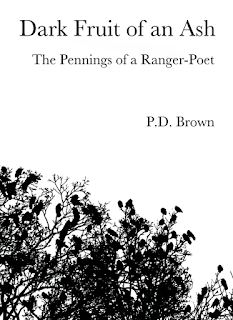 I'm glad PD has employed a new typesetter, because, at the expense of picking nits from such fine work, the first e-edition of his Hidden Door collection was marred by a typo right in the title. A Crown of Runes shows no such infelicities, not does his latest collection, Dark Fruit of an Ash, which he sent me during our communications about Crown of Runes. This book is subtitled 'The Pennings of a Ranger-Poet' and this is no idle metaphor; PD really does work as a forest and wildlife ranger in Aberdeenshire.

The outdoor life and love of the seasons and places and living beings, shines through everywhere in this collection. For just one instance, the poem 'On Broadleaved Woodland' follows the seasons of a year, but also the sad tale of a people who are now alienated from the woods:
'We lived there once and never can again'
There's a 'Requiem for a Road-Killed Fox', and a lament for the probably-impending extinction of the mistle thrush, in humanity's inhumane rush to spread our species over every other. Corvids speak to us in these lines - a jay, a crow, jackdaws, ravens and, synchronistically for me in my magical world, a magpie. 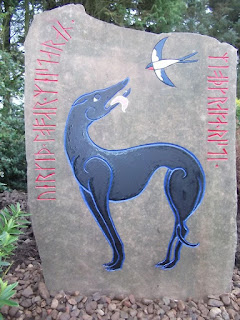 These are moving poems. The speech of the ravens may carry your heart away in their carrion claws. These books are all highly recommended for anyone who loves poetry, the land and its beasts, the ancient mysteries and well-told tales.