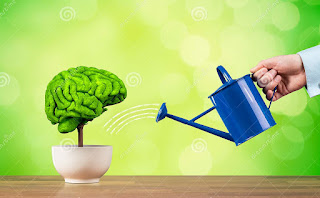 These thoughts come from a conversation with Mike Parker, a qualified Solutions Focused Therapist and originator of Liminal Coaching. In the course of discussing depression and his work we got into what the DMN is about. We are not neuroscientists, but two people whose background is in articulating personal experience and the technologies that we've found useful for navigating the immensity and weirdness of being human. Most of the opinions expressed below are from Mike.

If you suffer from depression, you'll be unpleasantly familiar with the experience of depressive rumination, a state where you tell yourself bad things about yourself and the world and can't stop doing so. If you consume neuroscience interpretations, it's not hard to get the impression that there's a level organization in the brain that is responsible for depressive rumination, that you have a villain in your head.

This level of neural organization has been called the Default Mode Network. It's supposed to be a pattern of interconnection between different brain regions that is seen on fMRI scans, the brain imaging that highlights neural activity through the variations in blood flow that show up on the scans. The fMRI patterns are the primary data; the rest of what we read about such things are interpretations.

It's easy to read about the DMN and come away with the impression that it's some kind of permanent structure. This is not the case; however, it is a type of complex, multiple interconnection pattern between separate brain regions that shows up consistently enough to get a name. Its appearance is associated with the resting brain, hence the word 'default' in the name. It's a type of configuration that comes up when we're not engaging with the outside world.

It does seem to show up when we are very inwardly focused, and that includes being focused on pain and distress. Research by Alvaro Pascual showed that focusing on a particular scenario caused more and more neurons to be repurposed to that task. This was the first real proof of neuroplasticity in the 90's when it was still considered dubious fringe science.
Another implication of this is that negative rumination can create as much stress, anxiety etc as actual events. This shows up in relatives of holocaust survivors who, unable to stop themselves imagining what their relatives went through, ended up needing treatment for real PTSD.

That's an example of how bad compulsive, negative internal monologue can get, and the DMN has come to be associated with that miserable state.

But it really isn't as simple as that.

The DMN is active in depressive rumination, but not only then. The DMN switches on in a certain mode when we do deep visualisation and scenario creation with our imagination.  That doesn't mean DMN causes negative rumination any more than my TV set being switched on means it is responsible for the show  content. It would be good to see DMN results for people doing focused positive magical visualisation or in positive guided trance. More than one practitioner using trance in treating depression describes it as a negative trance, a powerful imaginative state.

All of this stuff around DMN assumes that somewhere someone has more than the faintest inkling what it's doing. Here are a few examples.

This is an interesting and fun video on how awe actually results in the DMN switching on and people being more right hemisphere focused.

Then there's Social Neuroscientist Matt Liebermann claiming the DMN is only for social thinking, at 10 minutes here. He doesn't explicitly say DMN in this short video but does in his book Social: Why our brains are wired to connect.

So right now the DMN is being positioned as responsible for a number of different things. I think it is a general purpose complexity processing capability in part and probably has a lot of other functions as well. Certainly it turns on in REM and is implicated in memory processing.

My own take (based on theorising to the most inclusive simple explanation) is that it is analogous to general purpose computers. In other words it depends what you run on it as to what it does and it depends which of many possible functions you utilise. So in my own work I use trance and metaphor to do what I see as stimulating a particular kind of symphonic activity. Of course I don't have the huge sums necessary to conduct fMRI or even reasonable EEG studies to begin to support this model in the reductionist paradigm, so rely on the time honoured approach of combining that amount of best science I have the bandwidth for, abductive reasoning, what I can see working, and the ever present knowing that it is all metaphor anyway. If you delve deep enough into any evidence-based scientific statement you will always arrive at imponderables and the limits of the current metaphor.

My main thought about most of this type of research is that it shows really interesting and suggestive correlation that then gets conflated with implied causation in most of the thinking and presentation around the results.

Conversely, in my experience with clients, repeatedly having them build the scenario of their preferred future and what better looks like, prior to using trance (where the DMN is activated) for re-patterning has the corresponding effect. A kind of deliberately engineered positive rumination if you like.

So the DMN is much more than a structure which supports depressive monologue. It is also a much less defined, permanent kind of thing.

I also believe that the DMN is not a constant symphony of just selected brain regions but regions activated and included in the network can differ and the degree to which they are engaged can differ so I think the suggestion that DMN is these areas of the brain linked in this way always is really misleading. I suspect the same is true of what they are calling TPN (Task Processing Network).

I think both these terms are desperate reductionist attempts to freeze and explain the systemic holistic operation of the brain as a result of a few sets of interesting experimental results which suggest to me a vast field of systemic resonant possibilities. I have no doubt that different forms of systemic resonant interlinking across different areas of the brain is correlated with and possibly partly causative of an infinite number of different states of mind.

God forbid, though, that people might be empowered with the idea that they could alter those resonances at will. The internalised edifices of their own oppression might then dissolve and how would anyone have power over them then?

We are looking at something here which is the neural correlate of at least part of our construction of a whole world out of narratives. Access to this level of organization doesn't require exotic technology; we do it all the time in trance, and it is directly available in therapeutic interventions such as Liminal Coaching. As Mike writes in his promo:
'Liminal Coaching works to calm panic, help you accept sudden change, and see new possibilities.
And when you're free of stress, you'll feel free not just to survive... But to thrive'.

You can read more about this at www.liminalcoaching.co.uk.